Finding Your Own Way with Tia King

Tia King went through a true rollercoaster of experiences before ultimately finding her way to Make School. During high school, she completed a three-summer STEM program at Stanford University called SMASH Academy, but she still struggled in her computer science classes when she showed up to college. The environment she found herself in was so disheartening that she even gave up on computer science for a while, switching her degree to linguistics. "That's when I found out about Make School."

Tia started at Make School while on a break from her university classes and realized she'd finally found the environment she thrived in. She dropped out of her old program and dove head first back into coding.

Looking back at the difficulties she faced in her old college classes, Tia realizes, "The classes I didn't do well in were all theoretical. We were working in textbooks and doing problems in textbooks, and when you're learning tech, if you're learning from a textbook it's already outdated, because everything moves so fast." She continues, "In one of those classes we were learning Python, and even though that's one of the easiest coding languages to learn, I just could not understand the code without the application. That was the underlying issue."

The thing that Tia says she enjoys the most about the Make School environment is the freedom. "Make School provides any and all resources that they can to enable the students to do almost anything. You have to show the initiative and you have to put in the effort, but as long as you do that, they're willing to go above and beyond to make sure that you're able to achieve your goals. Combining that with the fact that its project-based learning -- so I can work on whatever I want to work on -- has been a very freeing experience."

Tia has already made two projects that she's particularly proud of. The first is called Page Planner, and it's currently available on the App Store. "I built the app that I wanted while I was in college. Basically, for each reading assignment that you have, it gives you a personalized reading plan. To add a book, you time yourself reading one whole page and then you put in the details of the book and tell it either the date you want to finish by or the number of hours you want to read per day, and it generates a reading plan for you."

The other project started as Tia's final project in Data Science, a topic she'd never studied before. "Data Science 1 has been my favorite class so far, hands down. Mike and Alan were teaching, and their dynamic together is crazy fun while at the same time very informative. It didn't feel like class, it just felt like having a conversation where I'm learning, and I've never felt like that in a class before."

Here's how Tia describes her data science project: "Basically, it's an analysis of the beauty community on YouTube. I'm really into makeup and have been watching beauty YouTubers for years, but I've noticed a huge difference in the trajectory of success for white YouTubers compared to black YouTubers. So I wanted to get data on why exactly that was."

Tia continues, "What I did was make a Python script that would scrape data from the YouTube website to get important information about a list of forty top beauty YouTubers who all had above a certain level of subscribers, and I found that by being on YouTube for the same number of years and putting out about the same number of videos, white YouTubers had on average four times as many subscribers as black YouTubers."

"Also," Tia adds, "with regard to the black YouTuber's most popular videos, people would watch their content, but their viewers were far less likely to invest in them as creators by subscribing. And this is important, because YouTube changed its content policy earlier this year so that, in order to monetize your videos, instead of having 10,000 lifetime views on your videos -- which is what it used to be -- you now need to have 12,000 watched hours and a 1,000 subscriber count. So if you're someone who's a small YouTuber trying to break into the creator space and make content full time, based on the data that I found, that will be more difficult for black beauty YouTubers compared to white ones, because people aren't going to subscribe as often."

Tia notes, "It's a huge project that just keeps getting bigger as I uncover more data, but I'll be writing a series of Medium articles about it all soon." 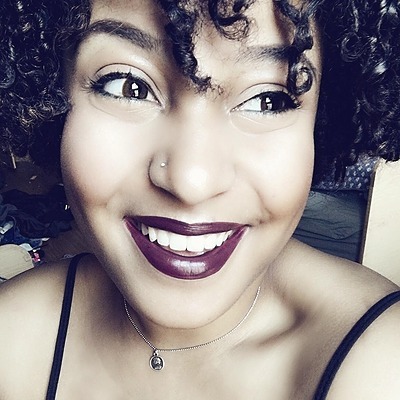 Clearly, Tia is someone who loves to learn and grow, and she found an environment that she thrives in at Make School. "Because of the mixture of how I ended up at Make School and the ideology that Make School has, I've learned that sometimes what works for me doesn't work for the majority, and I need to be really in tune with myself and what I want in order to do the things that make the most sense for me."

Tia goes on, "Between the coaching and the classes and talking with Jeremy (Co-founder at Make School) -- because Jeremy always makes time to talk with the students -- it's all encouraged me to live my own truth, whether personally or in my career, and that has given me a confidence boost as I go out into the world as a black woman in tech, you know? I'm going to be able to do the things that I want -- that's a given -- but the way I want to get there is all up to me."

In the past year, Tia has joined the team at Uber. To learn more about her work, follow Tia on her website.

Make School is a two-year computer science college based in San Francisco. The focus of Make School is product-based learning that prepares students for real-world careers in software development.